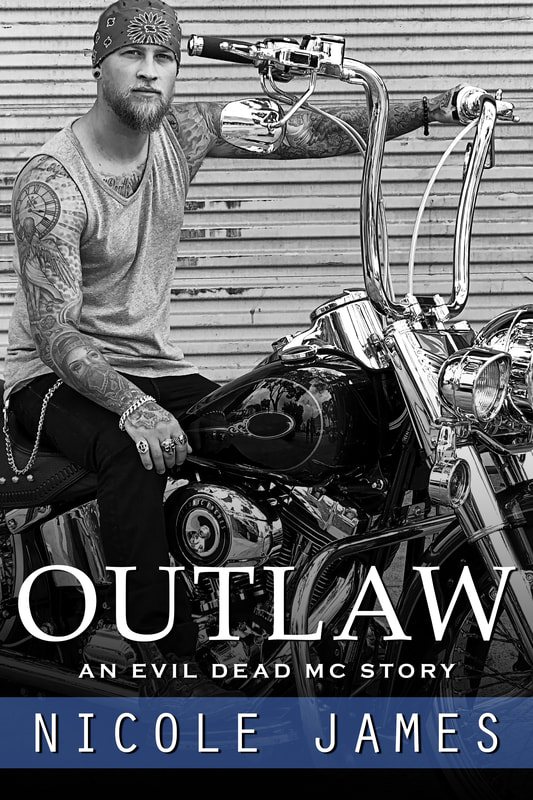 When outlaw biker, Cole Austin sees a young woman handcuffed and being dragged across the yard of the Dead Souls Motorcycle Club's remote clubhouse, he's stunned by the realization of just how dark his world has become. This scene is even more than his twisted soul can stomach. Compelled to intercede and save her, he has no idea his whole world is about to change. He believes he's doing the right thing until a secret she's hiding makes him question if saving her may be the biggest mistake of his life.

The two strike a deal, a deal they may both come to regret.

Is there anything he won't do for her or are there some things he just can't? 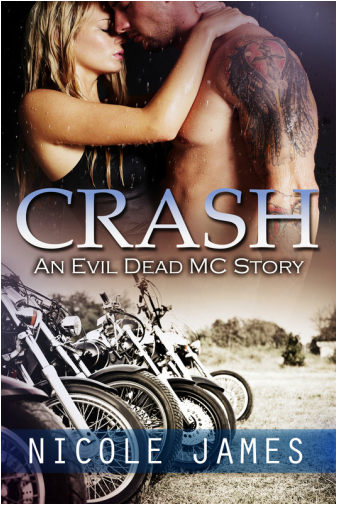 A troublemaker, that’s all she was to him. When outlaw biker, Crash, suddenly finds himself a rich girl’s bodyguard & babysitter, he thinks he’ll teach the stuck-up girl a lesson. The world saw a classy wealthy lady. All he saw was a spoiled little rich girl. Until she reveals the shattered girl inside that tries so hard to hide her fears with a façade of arrogance, attitude, and sass. 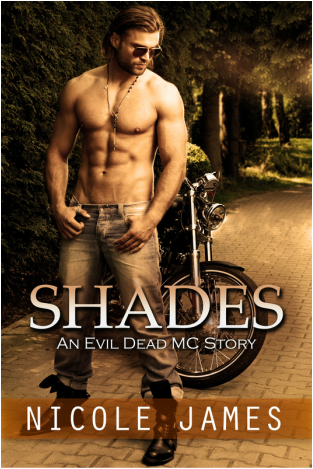 The love of his life just rode up on the back of a brother’s bike. Will Shades’ desire for earning a VP patch stand in the way of any future he could have with Skylar? When a rival MC shows up looking for her, things go from complicated to damn near impossible. Does Skylar come with more baggage than Shades is willing to sign up for? 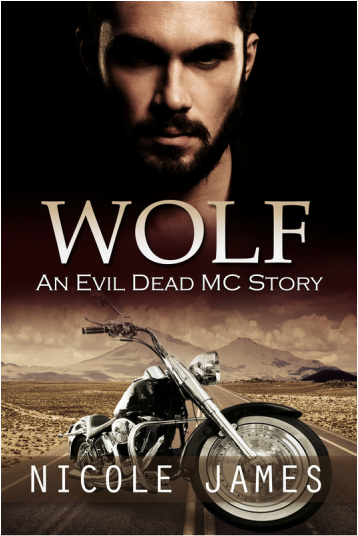 For the hot-as-hell badass biker, women have always come too easily—until Crystal. Buried under the sexy-as-sin tomboy with the smartass mouth that can put any man in the MC in his place, is a feminine side she only reveals when pushed. And Wolf is just the man to push. Problem is she’s the only woman to ever push back. Which only makes him more determined to have her. 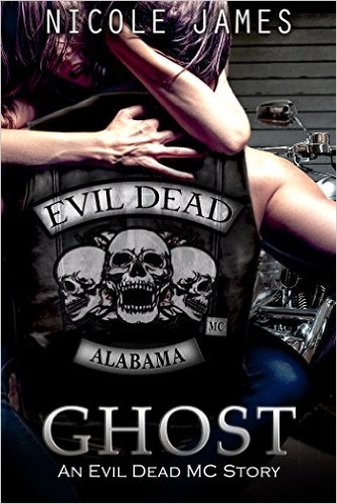 Ghost lives his life under one rule—never fall in love, never get tied down to just one woman. Focusing solely on his MC, he is able to remain unattached and free—until a girl from his past is dropped in his lap. She was a line he swore he’d never cross. Now, to obtain an alliance his club needs, he’s forced to use her in ways he’d never imagined. She needs his protection, and she’s the one woman he can’t refuse. 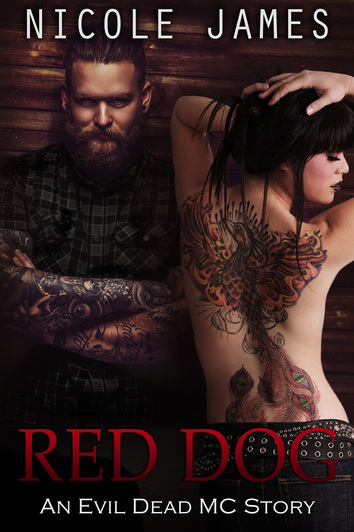 The boys of the Evil Dead MC are out on business—the shady kind that happens in the dark of night miles from nowhere—when Red Dog gets a call from one of his club brothers. Seems Red Dog’s ol’ lady has picked tonight to take off and go drinking fifty miles from home. Just wait until he gets his hands on her. Only problem is—that may be easier said than done. 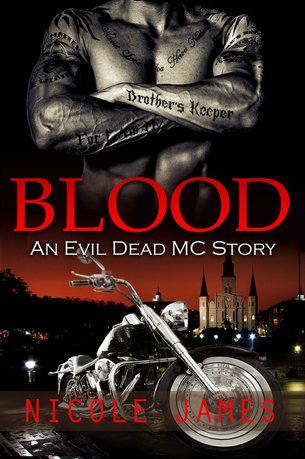 A tale of revenge, loyalty and debts owed. He’s the Enforcer for the New Orleans Chapter of the Evil Dead MC. She’s a nurse, kidnapped and thrust into a situation out of her control. Chained to a bed, his wounds on fire, his mind foggy with fever, Blood is losing all hope of ever making it out of the stifling New Orleans row house. Until the door opens and an angel of mercy is thrust inside. Nurse Catherine ‘Cat’ Randall stared at the man on the bed. He’s dark and dangerous and everything she hates—just another filthy biker. Only he isn’t. He’s nothing like the others. And she’s his only hope of escape. Can she risk helping him? Can she trust a man who wears an MC patch? How can he be her savior when he wears the face of her deepest fear?

Blood owes the pretty nurse a debt—one he’s determined to repay, even if it clashes with his duty to his club. He made her a promise. But time is running out. To keep that promise and repay the debt he owes, he may have to sacrifice it all—everything that ever meant a damn to him.

Fighting treachery, betrayal, and dirty deals, there are a hundred ways it could all go wrong, but Blood is determined to have Cat for his own. She’s fast becoming his weakness. As the smoldering passion between them flares to life, burning hot and intense, no one is going to stop him. He wants it all, and he’ll settle for nothing less. 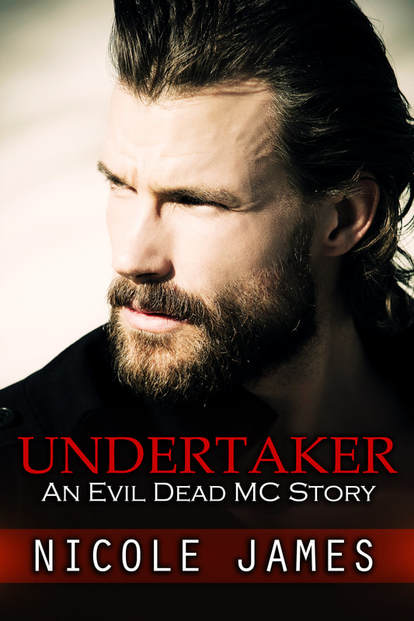 When an ex-con biker sets his sights on you, do you run? No? Not even when he comes with more trouble than you can handle? The last thing Undertaker, President of the Evil Dead MC’s New Orleans Chapter, expects to walk through his clubhouse doors is a face from his past. They’d met years ago when he’d been ordered into counseling as part of his parole. Now, a dozen years later, fate was throwing them back together. But Allison Carter isn’t a naïve girl anymore. The once fresh-out-of-college psychology intern who’d been put in charge of his case is a respected therapist and all woman now.
And the President of the Evil Dead’s New Orleans Chapter wants to make her his.
It won’t be so simple when trouble from his past threatens everything.

Eleven years locked in a cell does things to a man, but back then Undertaker hadn’t had time to deal with all his demons. He had a motorcycle club he needed to get back to, and an untimely death in the ranks had him stepping up to fill the spot of President and fulfill his destiny—one that didn’t include the cute little intern who’d been put in charge of his case. She’d known nothing of his problems. How could she?
Besides, he’d scared her to death.
But that didn’t stop him from using her to get what he wanted, no matter the cost or damage to her. 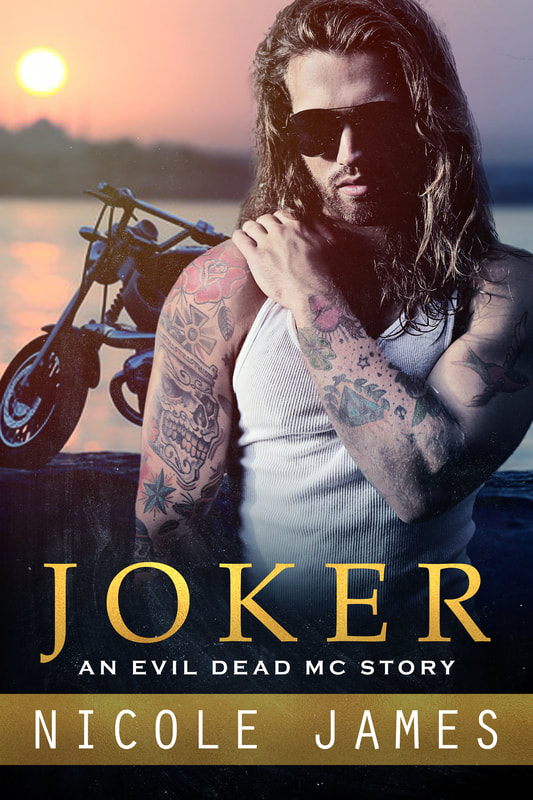 JOKER
He has no idea what he’s done to earn the crap job of being this little brat’s new shadow, but he’s not about to let the president of his MC down. Joker was given one stipulation, she’s off limits. Holly may be a brat, but she’s also beautiful—and keeping his hands off her may be the death of him.

Joker isn’t about to stand for Holly’s bratty behavior. And he’s definitely not going to take any disrespect from her. For every stunt she pulls, he’s right there to drag her out of trouble and rein her in.

HOLLY
She’s a twenty-year-old girl working towards getting over her traumatic past, and moving forward with her life. That means leaving the safety she’s found at the Evil Dead MC’s clubhouse, and returning to school and an apartment on campus.

Last thing she wants is her new biker bodyguard to think she’s a scared little child. So she bluffs her way through situations, pretending to be tough and fearless, when in reality she’s the complete opposite. 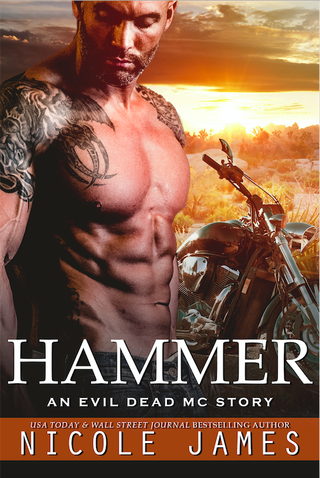 A badass biker and the sexy little sprite that wants nothing to do with him.
They’re opposites in every way that matters—except one—they can’t keep their eyes off each other.

Hammer watches Tink strut past him without so much as a glance. His eyes moving over her hot little body—a body that’s been driving him crazy and keeping him awake at night. She’s the one chick he’s been infatuated with for months, but she won’t give him the time of day.
Hammer just doesn’t get it. After all, he’s a big, muscular man who turns female heads wherever he goes. Tattoos cover the skin of his sculpted body, and that combined with being a patched member of the Evil Dead MC does it for most women who are into bad boys. Not Tink, though. Unfortunately for Hammer, the one woman he wants more than any other seems to be immune to him.
Well, he’s had about enough of her snubbing him like he doesn’t even exist. He’s going after what he wants, and what he wants more than anything is that hot little girl with the short white-blonde hair. The one so petite, the guys in the club nicknamed her Tinker Bell.
Yes, that sexy little sprite is going to be his.

Tink is totally aware of Hammer’s eyes on her as she walks past. Warmth floods her body, like it does every time she’s near him and he looks at her that way—like he’s undressing her with his eyes and imagining all the sordid things he’d like to do to her. Things she lies awake at night imagining as well.
But Tink isn’t willing to risk her heart; not for a man who could hurt her like he could, a man who has already been with her sister. Raven always gets what she wants, and that’s usually anything she thinks Tink might want.
Tink learned long ago not to even try to compete with her sister. It’s pointless. So, she’s carved out a life for herself surrounded by the men of this MC and the women who have become her best friends. It’s a world she thought her sister would never be interested in, and one where she’ll never have to compete with her.
Apparently, she’d thought wrong.

What happens when a badass biker wants the one woman he can’t have?
How far will he go to have her? 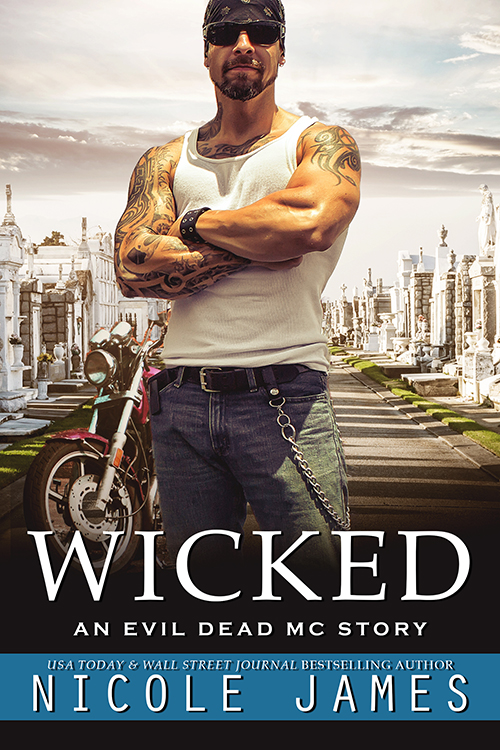 A woman lost in grief and pain.
A bossy biker determined to bring her back to life.
A wickedly wild ride.

Paige knows the meaning of pain and loss.
Two years ago she left town to nurse her grief over the death of her husband in a tragic bike wreck.
Now she’s back—returning to the one family that understands the depth of her loss—her MC family.

WICKED—
My brother’s ol’ lady.
I’ve carried unspoken feelings for her since the night we met.
Ransack and I were as close as two MC brothers could be. I was with him the night he died.
I held Paige in my arms in the trauma bay as she collapsed, her wailing sobs tearing my heart out.
And the month after the funeral, I helped her load up Ransack’s old truck and head off for Macon—taking my heart with her.
I wish I could take that pain away from her.
More than once I’ve wished I’d died in my brother’s place.
Ransack’s death had been a huge loss for me, but watching Paige drive out of my life as well, ripped my heart out.

Now she’s back.
When I see her standing across the clubhouse, instantly my lust for her flares back to life like it’s been days, not years.
She drove out of my life once, but I’ll be damned if I’ll waste this second shot with her.
All I have to do is win her heart from a dead man.

I’ll do anything to keep my woman safe.
Only problem is—
Paige is stubborn and willful. And she never does anything she’s told.

PAIGE—
Wicked. He’s the one man I could always count on.
When I see him across the clubhouse for the first time in years, my heart begins beating again.
I need him, more than he can possibly know.
But in order to have a chance together, I have to let go of the past.
That’s easier said than done.

When information comes to light, I begin to question if my husband’s death was the tragic accident it appeared.
Determined to find out the truth… I won’t let anything stop me.
But the evidence I dig up could put everything I hold dear in jeopardy—Wicked, our future, and my very life. 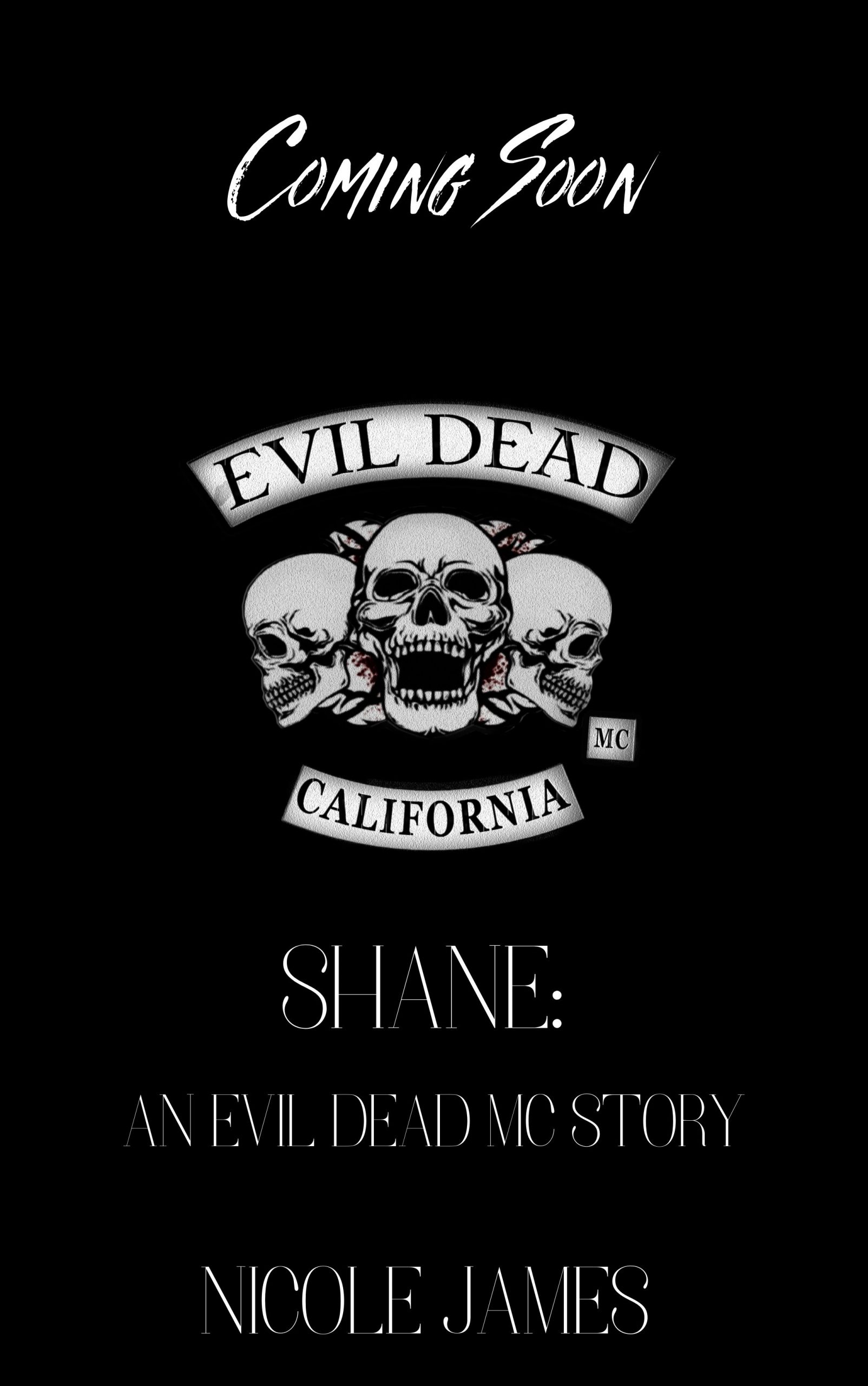 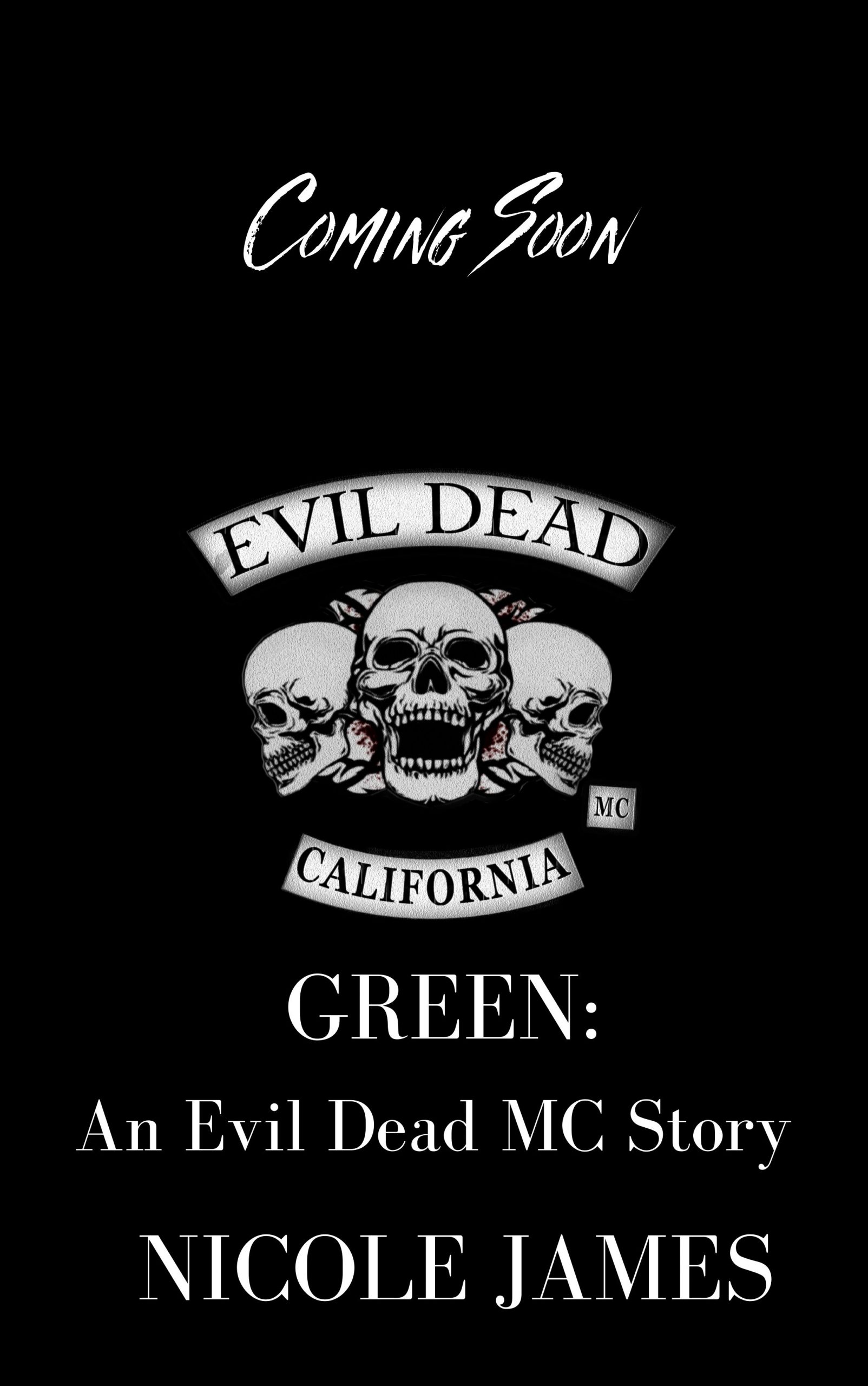