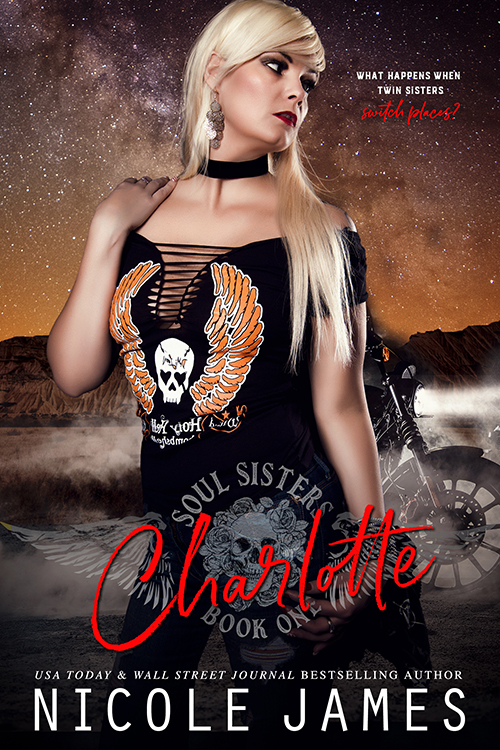 Does the MC President want her bar badly enough to scare her into selling out?
Or is he the only one who can save her from a madman?

Rocker Charlotte Justice longs to escape her hectic life. Her estranged twin sister, Scarlett, owns Badlands, a biker bar outside Vegas, and has always wanted a chance at the limelight she feels was stolen from her.

On a whim, they decide to switch places like they did when they were kids.
What harm could it do?

Charlotte had no idea that the escape she planned would leave her on the receiving end of creepy texts, phone calls and "gifts" left at her door. Flying blind in her new role, pretending to be someone she's not, Charlotte learns more about her secretive sister than she ever imagined.

On top of all of that, she's doing everything she can to escape the sexy-as-sin MC President demanding she pay back the debt she owes him--that or sell him the bar.

Could the person stalking her also be the President of the Evil Dead MC's Las Vegas Chapter? An alpha male who's come-on to her in a won't-take-no-for-an-answer kind of way that has her wondering just how badly she wants to say no.

Does he want Badlands badly enough to scare her into selling out?
Or is he the only one who can save her from a madman?

Charlotte will have to solve the mystery if she's going to save the bar, and possibly her very life.

NOTE: THIS IS A CLIFFHANGER

What happens when twin sisters switch places? Scarlett and Charlotte have been estranged for years, and the secret that tore them apart pushed them into two very different life paths. One became a rock star and the other a biker chick. Can walking in each other's shoes mend their relationship and heal old wounds?
The exciting conclusion to the Soul Sisters Duet.

When Rocker Charlotte Justice proposed exchanging places with Scarlett, the owner of Badlands, a biker bar outside Vegas, Scarlett thought she'd get a chance at the limelight she felt was stolen from her, and perhaps escape the devastating grief she's been living with ever since she lost the love of her life.

So on a whim, they decide to switch places like they did when they were kids.
What harm could it do?

Scarlett has no idea that taking Charlotte's place will lead her to answers she's sought all her life, not to mention meeting the one man who might be able to heal her broken heart. Will the billionaire that's fallen for her stick around when she reveals she's not the rock star she's pretending to be?

Flying blind in her new role, Scarlett will have to navigate the cut-throat, and sometimes backstabbing world of concert promotion, recording labels and unscrupulous managers. It's not all signing autographs, choosing pretty costumes and playing with the band.

Scarlett will learn more about her rock star sister than she ever imagined.
Will it be enough to bring them back together, this time closer than ever?
And this time will love conquer all?